Where did you surf today ?

Ulus has been big lately on SOB. A few old codgers on rhino chasers scoring a few....and a few floggings. It always looks like a great wave to surf at a bit of size....until you look at how much whitewater you would be dealing with if you got smashed...plus coming in.
Eat some steak and stop being a whiny little cnut.
Top

foamy wrote: ↑
Thu Jun 03, 2021 9:36 am
Where I used to stay about 1km from the beach, some nights you could hear this thrilling deep wave rumble rolling across the land. This was just about always caused by the little slappers. The little slappers occur on still nights which partly explains the noise production.

If you can be arsed googling it, Swellnet did an in-depth article behind the science of a small shorie creating more noise than a big swell.
Top

When I lived at Port Campbell the house would shake on a big swell. The noise was phenomenal- background constant coupled with the boom of the set waves. It was a signal for me to head Northwest. I’d check the activity on the beach in the early morn. Very attentive to their skis and other equipment. Slater was there once. Impressive as that is, the old-school chargers would roll up on the cliff after milking cows and paddle it

Had a bit of a bash. A bit crowded but nothing like yesterday. I counted twenty guys on a non existent peak.
Eat some steak and stop being a whiny little cnut.
Top

Gone flat up here.
I needed the rest though.
#sixfeetissixfeet!
Top

I remember as a grommet in Newie if I counted 10 out I’d think fcucking crowded.
Now I surf at Bondi lol
Erase.
Top

Noosa used to be like that too. Twenty guys with literally nothing breaking.
Eat some steak and stop being a whiny little cnut.
Top

Fun day of head high plus beachies. Three go outs. Had a bank to myself.

So much for the heavy rain, large dangerous surf and freezing temps. A bit cool. Glorious day. Surf flat with 6 learners out on foamies. A couple of swimmers in the water.
Eat some steak and stop being a whiny little cnut.
Top

Beanpole wrote: ↑
Thu Jun 03, 2021 12:21 pm
Ulus has been big lately on SOB. A few old codgers on rhino chasers scoring a few....and a few floggings. It always looks like a great wave to surf at a bit of size....until you look at how much whitewater you would be dealing with if you got smashed...plus coming in.

So I believe Richard Harvey is credited with being the first person to surf Padang when he got washed down there on a big day.
Eat some steak and stop being a whiny little cnut.
Top

I was sitting in a warung just near the old ulus steps, it was well after sunset and a guy I knew came running along the road with his board under his arm, WTF are you doing I said.

He said he had been surfing a huge swell at Outside Corner right on dusk when a huge set came through and washed him down the to Padang. He came across a surfer who had lost his board and was panicking.
Last edited by Cranked on Wed Jun 09, 2021 1:07 pm, edited 1 time in total.
“I don’t necessarily agree with everything I say ”— Marshall McLuhan
Top

He offered him his board and the guy gratefully accepted and calmed down. WTF I said. He replied that he didn't care if he was washed down to Kuta, he could swim all night.
“I don’t necessarily agree with everything I say ”— Marshall McLuhan
Top

Jim swam out sea because the swell had really jumped and waited there assessing his options. He hoped someone had seen what had happened and they would organise a rescue because well out the back there was a counter current taking him further out to sea.

In the end he started swimming, came in at Tomas beach where he came the the closest he had ever come to drowning - stuck in thick foam and not able to breath, he just had to stay deep and keep swimming under water.

Good story Cranked! How long ago was that?
Top

around 5 years ago, maybe more

Banksy said he was in the primo position for the next set and no-one was within 300m of him, most were already off to Padang to get in after being caught inside, no way in at Ulus. Then he saw the set and started paddling for the horizon. It was a day predicted to be big, I'd been watching from about 4pm and there wasn't anything really big. Jim came down and said he was going out at about 5pm, I said it wasn't that big, he said there might be a few around sunset...

I can relate Jim catching the previous biggest outside corner wave in the early eighties (eclipsed in that swell 2-3 years ago), that was absolutely classic:

Everyone surfed Padang in the morning, a few attempted Ulus, notably some crazy guys from the gong, but it was desperate stuff and no-one really got anything but severe beatings.

We drove up from Padang at about 3pm. No-one was out, around 100 people watching. Jim walked out from the cave (low tide) in a lull and started paddling. We could see a set on the horizon, it was going to be close. Jim changed his paddle line to point further south of outside corner (!!!!!), I though fcuk your gonna die there, the set was huge about 12 waves. Jim just kept paddling, he made it over 3, 4, 5 and the biggest wave was going to crush him like and ant, he was paddling up the face for all he was worth and it looked like he couldn't make it.... but he suddenly spun around on the face, took a few strokes and dropped in. He was behind the eight ball all the way and then there was the corner when it looked like a complete close out.

"I knew the corner was coming up and thought if I didn't make it I was gonna die. It started to pitch and I thought there was no way out, I scrunched myself up into the smallest ball possible and just held on for what seemed forever, then suddenly I was out with my heart pounding."

From the shore it had looked impossible, everyone new he couldn't make it, there were groans of disbelief, it lasted what seemed to be forever and then suddenly he made it out and everyone was cheering.

It looked like about 35' (imperial) to me. There's a faded print on his restaurant wall if you want to see for yourself
“I don’t necessarily agree with everything I say ”— Marshall McLuhan
Top

Cranked, love the tales. What happens to the wave when it hits this Corner- is that where it kinda unloads as a barrel? Do you normally take off after that?

I've never surfed Bali, or Indo. Was all ready to rock last year and the 'Rona hit.

The only positive to that sad fact is that I'm always frothing on what we have here, compared to the grumpy faced surfers who've just been to Indo and gotten shacked outta their minds. They always have a look like someone put soy sauce in their can of coke.

Here's a good pic (look closely, everyone is at Outside Corner): The above diagram has the peak in the wrong place though. Here's where it really is - and there's an outside peak when its big 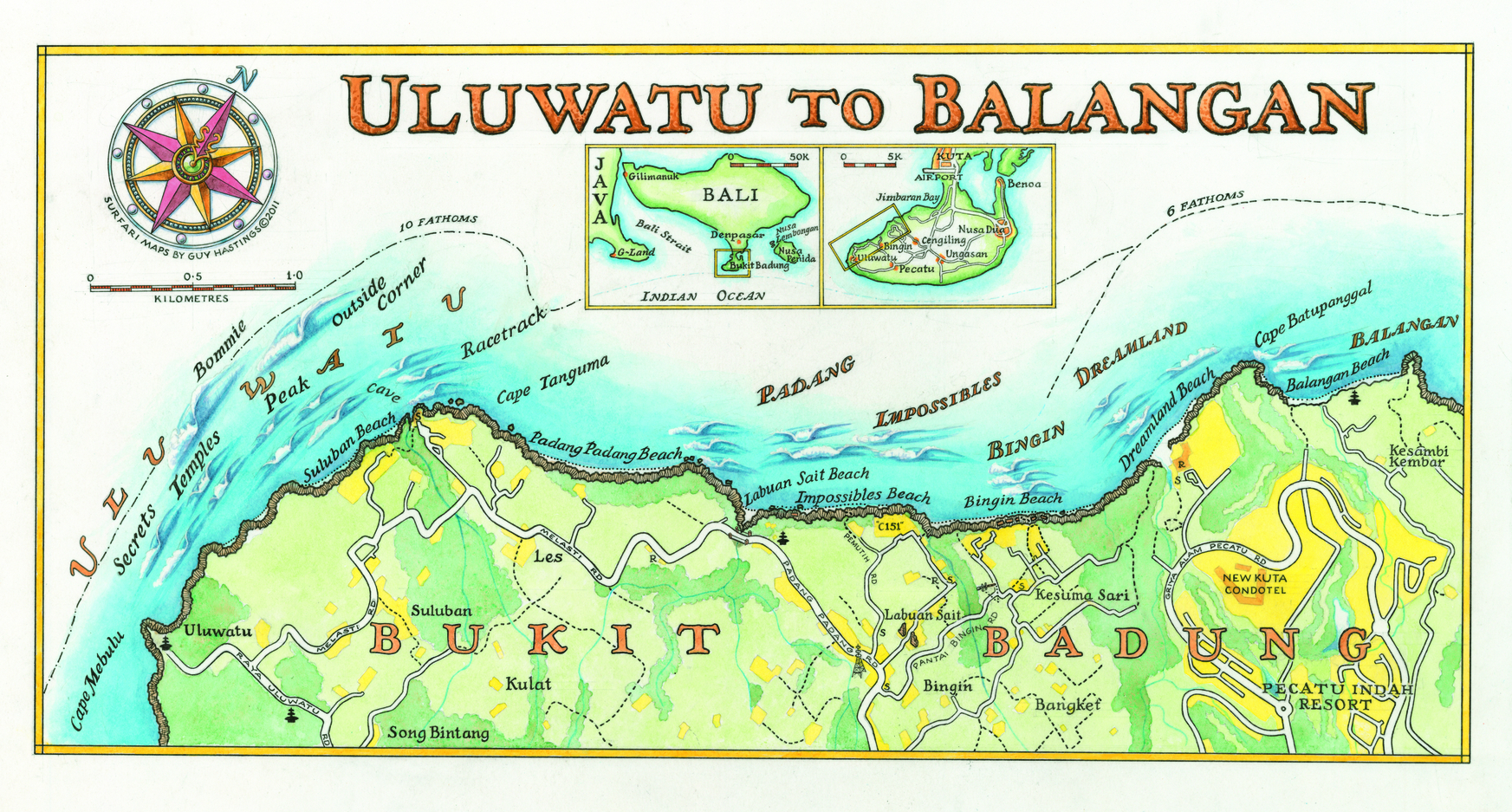 On big days you can ride from the Bombie through the Peak, Outside Corner and Racetracks. The transition from the Peak to Outside corner is hard to make and thats where Jim nearly came undone.
“I don’t necessarily agree with everything I say ”— Marshall McLuhan
Top
Post Reply
25063 posts

Users browsing this forum: No registered users and 3 guests