A place for longboarders, eggers, fish riders... if alternative surfcraft is your game, here's the place to chat about it

Lots of talk about these boards over at Swaylocks.

Anyone tried them in Sydney waves? Any opinions?

In one of the recent Surfers Journals one of the hull originators said that McCoy Nuggets are essentially hulls, but the foil on these boards looks way different. I'd love to get a McCoy as a single fin and give it a bash......
Top

I don't know if you could class a Nugget ( Loaded Dome) as a hull. Yes they do have some camber but no where near as much as a hull. The first photo is a Nugget. The second and third are a Mc Coy shaped Bennett tracker / hull. Some day I will ride the hull. platty. 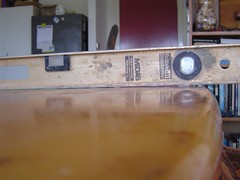 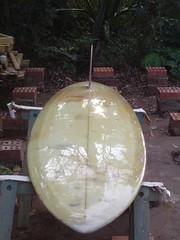 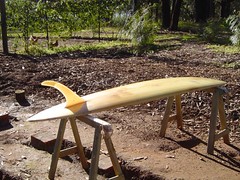 i have only ever seen and held one but they look so much fun to ride and they have a interesting s-deck so they might take a little getting used to.
Top

I have a McCoy Nugget single fin, although it was shaped by Darren Rogers. You definitely notice diminished drive out of turns compared to a thruster, but it paddles and trims faster, and after a while you just get used to it.

I pretty much only use it in really tiny surf. I have to confess I really love it though. New surfboard #3 or so would be a thruster nugget in about the same dimensions, just to enjoy the different sensations. That won't be for a year or two though.
Top

Interesting someone should post this here. I've been trawling swaylocks for stuff on hulls for a while and thought about a forum here so thanks for putting it up Morgan. The surfer's journal article was great and has got some mates and I interested in hulls.
I used to have a thruster nugget and found the way it planed across waves different to anything I'd ridden before. I sold it, now to my regret, because the main place I was surfing was Bondi/ Tama and having the biggest part of the foam at the back of the board meant hammerings on beach breaks. Now that I'm in Perth for a year I'd like to give on a go down south.
Back to hulls the older ones seem incredibly difficult to ride and probably need some tweaking for a modern version. The rolled bottom is hard to control putting some vee in it may work? It seems with the fin beng placed relatively high up the board they need to be surfed from the middle rather than too far back.
In the innermost limits of pure fun clip posted recently they appeared to be riding boards that at least had a hull outline.
One question, does anyone know how closely the US hulls are related to trackers?
Platty, on that tracker is the bottom just rolled or does it have any other shape? it seem pointier than others i've seen.
Top

Hamish. The bottom is rolled pretty much all the way through. The camber is less in the nose and tail. Maybe those photos are a little deceiving, it has more area in the tail than some of the others I have seen and worked on. platty. 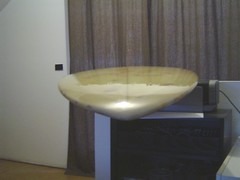 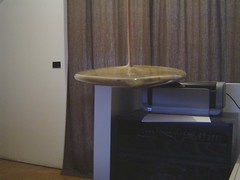 what about trackers? were they the australian version of the hull? there seems to be a lot of them around. there's one i was looking at made by wallace surfboards which has a similar bottom shape to the one in yr pics platty, but is more egg shaped, the fin is quite high up the bottom too. however the shop is asking way too much for it- 650 ouch
Top

I don't know to much about the American hulls, apart from that, they are very popular over there. And still being built today. I suspect that they have a link back to the late 60's. The Aussie Trackers only lasted for a very short period of time. Maybe if things, from a design point of view were'nt moving as fast in the late 60's, they may have developed like the American boards have. platty.

Never knew that a tracker was essentially the same as a hull. Is that one of the Bennet pairs that you were restoring? You'll have to let us know how they ride.

You're right about seeming to have to ride them pretty high up the board, there's a bit of Liddle riding from Jimmy Gamboa in the Thomas Campbell flicks. Seems to ride them from the middle. They're meant to trim unreal, but turning them is a bit of a learning curve with a full rail tilt. With that in mind, I suppose they'd be too much of a handful on Sydney waves.

One day I'll get my hands on a single finned McCoy, maybe they're better suited to beachies (thanks for the feedback Buzzy). I think it might've been Kirk Putnam who said they're essentially a hull. Anyway, thanks for the info guys........
Top

thanks Platty. those board are really knifey at the tail there. just what i'm after. the aussie trackers seem altogether differnet from the US hulls.
Yeah Morgan it's the turns that concern me. from what i've seen, it seems the rails are fully submerged for a turn. i guess this is where the greenough fin may come into play- for that snap back. the trim - a la gamboa - looks awesome on them though. maybe with tweaking the bottom a bit there's a way to improve the turning, though it would be a shame to abandon it for the sake of convenience.
the fact that they are still being manufactured a lot on the west coast of the USA is interesting.
i've relocated to WA for 12 months so I'm keen to give one a go over here. will advise on the construction progress of the aust hull- via byron to WA.
these sites, aside from being very cool, have lotsa hulls
http://www.mollusksurfshop.com/
http://www.mandalacustomshapes.com/index.html
Top

I used to have a Robert Coneelly a million years ago that I think was called a hull. It had chamfered rails and a big concave.
Top

What about Chris Brock?
Top

I think this board fits into the hull category. It arrived yesterday for a basic restoration. It is a Farrelly 7' x 19.25" x 14.75" nose x 14" tail. It has that S deck look, like the Liddle hull MTM posted. The fin has been chopped down. It is way two small for the board now.platty. 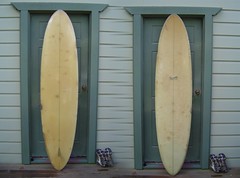 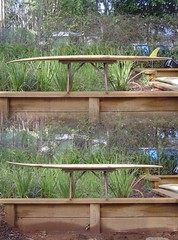 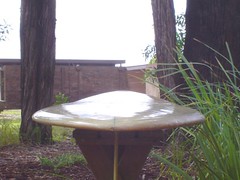 is that a farrelly slideslipper with a drawn out template
Top

p-a now that i look closer at the board, it does look heaps like a longer, blown up version the 'side slipper'... not as much S in the deck though
Top

I'm pretty confident that this board was made in the late 60's. It has pinched 50/50 rails and a fair bit of camber in the deck and bottom. The side slippers appeared in the early 70's from what I understand. They had flat bottoms and what would be considered, hard down rails in the 70's. They also had a more modern planshape. Don't be fooled by the fin in that board. It appeares to have been chopped down. Maybe who ever did it wanted to turn it into a side slipper.platty. 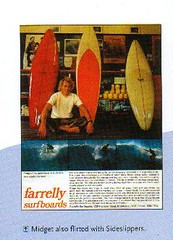 Greg Liddle is still shaping boards on Maui. I ordered what he calls an Inbetweener, with a slightly less parallel plan shape than his classic point break design. Had to have it sent to a mate in New York and pick it up when I passed through, as he won't deliver outside the US. Won't give you his number either, but he gives very good advice if you email him. He's very particular that you undrestand how his boards are designed to ride and that you be prepared to make the effort to get them right.

My new board board is sitting emiting fresh resin fumesin the corner of my room somewhere in Southeast Asia, waiting for the Northeast 'Monsoon' to kick in at the end of this month. The pinched rails, displacement hull and still fairly parallel planshape are going to be interesting on the beachies I surf up here, but the waves are pretty straight and zippy along the banks.

On another point, somebody mentioned that their singlefin lacked the drive of a thruster. Dunno about that. A singlefin - especially a flexible one like Greenough designed and Liddle has refined - will give you heaps more drive than a thruster, which is loose and instantly responsive but in no way will give you the same drive.

As for the 'buried rail' turn from the front of the board, it sounds complicated if you think about it, but if you just lean into the turn forward on the board, the design does all the thinking for you. Just forget about trying to pivot hard from the tail - you'll spin out.

Let you know how I go when the swell arrives ...
Top

Thanks for the info Wayback....

What board do you normally ride?

I really like the way that they're (intended to be) ridden and I'd be really keen to hear your feedback on how they go on a beach break.

Did you go the single fin option, or did yours have the side bites?
Top
Post Reply
119 posts

Return to “Logs, eggs and alternatives”

Users browsing this forum: No registered users and 12 guests