Keep up the good work, The Mighty.
Top

Did Wooly post on here for a while?
Top

BA wrote: ↑
Sun Dec 29, 2019 3:31 pm
Seen some interesting amateur footage. Looks really crowded in the takeoff area with a full crew out. Waves look a lot more warbly too than all the promo stuff.

Found this on the Tube. Surfing starts at 8:00

Got a session booked on the right next Monday forecast is for dead onshore. Will post report

How was it? I had a friend surf it this morning that said it was very fun and harder than he thought it would be. But he isn’t the greatest surfer..

Planning a session once school holidays are over.
Top

Not a great intro to the Tub - smoke was really bad yesterday - air quality rated very poor. High pollen count triggers my asthma but it didn't occur to me that smoke would do the same so I didn't take a puffer. Was a bit weazy when I got there but decided to go out anyway and had a terrible session. the take off is a lot harder than it looks. I couldn't paddle with any power and blew half my waves. Also I think I had the wrong board, kept getting hung up in the lip - I noticed the other newbies doing the same. Have another session booked for Thursday. Hopefully, the air quality will be better and I can give it a proper go and a proper review.

What's the right board, pinny?
Top

I know I'll be pilloried for this but ... Hypto crypto or Cymatic. Basically something short, that planes quickly, and releases in the pocket.

Who is she TMS?
Top

You had to ask. I'd know that talent anywhere. Songs not so much.
Top

Ok had a better session today only a bit of smoke and no asthma.

The facility itself has a contemporary surf retail vibe. It feels like you're on the beach with people getting ready to go out and coming in, boards lying everywhere and so on - but you're not, you're beside a concrete lined swimming pool. Myself and my fellow surfers all seemed to be a little weirded out by the experience - a bit of cognitive dissonance creating an uncertain mood.

The waves come in sets with a wait for the turbulence to settle after each one. Paddling out is a doodle, you zip along on the rip created by water from the previous set draining back into the deep channel. The current also runs toward the breaking wave. If you fall off halfway down the line, Its very difficult to paddle to the shoulder and back to the channel, because of this - you are instructed to get washed into the lagoon after a fall. When the machine starts up, water and anything floating too close to the wave generator gets sucked toward the protective mesh - this is pretty disconcerting at first. It took me a couple of failed attempts to figure out how to catch the wave - you don't really have a sensation of planning - you basically have to paddle hard to stay at the bottom of a lump of water as it stands up and get to your feet quickly - then it feels like a normal wave. Its a little difficult to stay in the pocket to find power in the wave, for turns. Today I got more waves than I could handle - we didn't have a full crew (the left is less popular) but I noticed the staff joined the session and were snagging a few waves that perhaps could have been ridden by paying customers.

I was pretty knackered during and after the session. Your enjoyment level will depend on how fit you are. I prepaid for a bunch of sessions so I'm hoping to lose a fortnight of doing nothing but lazing around guzzling ale and eating rich food and then hit the ocean when the school hols are over.

They have a photo service and the photog is pretty good - although he did manage to make me look like Worm tongue from Lord of the Rings. (see below) However I've decided to cultivate this expression to discourage drop ins when I'm in the ocean.

So is it worth it? Yes if you can afford it, its a good way to keep your hand in.

However as an urban cube monkey I noticed I didn't get the same satisfaction that emersion in nature brings. I'm guessing people who live near the beach and surf crowded line ups, will actually enjoy it more just for the wave count. 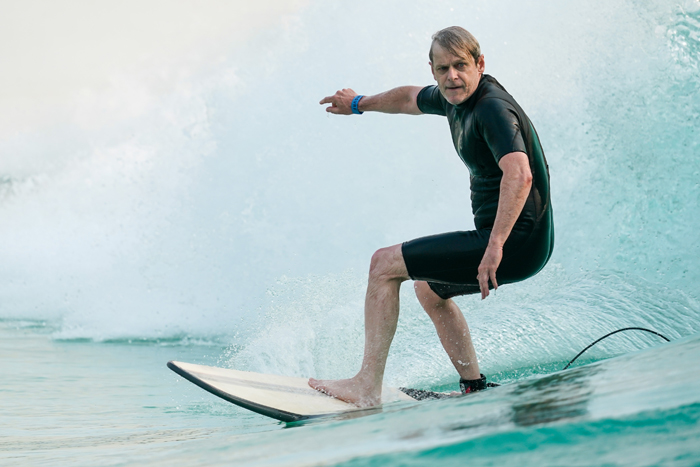 Nice one pinny. The second rs member to surf an artificial wave (that I know of). Good review.
Don’t think I’ll ever do it.

Pinny, it sounds like you're adapting to its quirks and starting to enjoy it, or at least see some potential?
“I don’t necessarily agree with everything I say ”— Marshall McLuhan
Top

Keep the reports coming mate.
Be interesting to see how you adapt to it over time.
#sixfeetissixfeet!
Top

Pinny, I was looking at times for a few work trips I need to do soon.

Were you on intermediate or advanced?
Top

Were you on intermediate or advanced?

I was on the advanced session.

Users browsing this forum: No registered users and 2 guests